I moved aside. The trail that led to the mountain viewpoint had thinned as it entered a wooded section of the national park. I pressed myself against a tree as a nimble, handsome (and most notably), extremely young backpacker cruised by me.

“Thanks, have a nice hike!” he said with an Australian accent, his smile dazzling. I squinted at him as I watched him hop from rock to rock with the grace of a gazelle.

“You, too” I said, feeling more like a discombobulated elephant.

I sighed as I tightened the knot that I hoped would keep my puffy jacket around my waist. For the last 2-3 miles I couldn’t keep it from sliding south of my rear end. My left shoelace, once again, was untied. My backpack was a mess and overflowing. Over-preparing had led to the creation of (what was meant to be) a day pack, though it more accurately reflected the needs of someone traveling for a few weeks with Lewis and Clark.

Did I belong in Patagonia? It was mile 5 of 12, and my hind end was tightening in a way that I suspected would leave me screaming if I attempted to ascend a simple flight of stairs later in the day.

I placed a hiking pole on the ground and stepped forward. A few feet ahead of me was Husband.

“Babe, we really have to get moving” he said.

He picked up his pack and followed me. “We still have over half the hike left, do you think we can pick up the pace?”

“My legs are short.” I said. Let’s be clear that my brain was not processing things in a manner that could be considered logical. I was being a grump. Not what I wanted for a trip that had been 10 years in the making.

“What?” Husband said, now behind me.

He was (very wisely) completely silent after my comment.

I caught myself before I went further, an attempt to keep grouchiness in check. “Why don’t you go ahead of me, you set the pace and I promise I’ll match it.” He passed me and we moved on.

The trail opened to fields and bogs. We were stunned by the appearance of a glacier to the right of us, and the famous peak of Fitz Roy just to its side. We stopped and unpacked our photography equipment, pausing to take it in. I relaxed a bit, and felt my mood shift.

The views left us both in awe.

The trail weaved through marshes and over rivers and through brush fiery red with foliage. I stared wide-eyed at the Patagonian vistas I was witnessing.  The light was perfect, skies a bright blue. The smile did not leave my face.

…until we came to a sign at the edge of the woods.

I knew instantly that the elevation in my mood had been directly correlated with the lack of elevation on the trail.

“Shit, Gavin…” I heard myself say under my breath.

“Babe” he said again, now sounding exasperated. “Don’t even think about it. Just take it one step at a time.” He said, moving past the sign. And then, as the view of the trail ahead became clear, he laughed. “Ok, maybe one scramble at a time”.

Giant boulders lay on a mountain ahead of us. A narrow trail led the way by, through, and then over the rocks that sat at the edge of a cliff.

I opened my mouth to protest and my husband shut me down with a glance.

I did what I was told. I took it one stone at a time, grateful for my hiking poles. My pace was shockingly slow.  I was silent. Many hikers passed me, while others sat on rocks, resting, equally unprepared for the vertical nature of the trail.

Pole, step, step, pole, hoist body up… the pattern repeated itself for well over the anticipated hour, my husband patiently making stops to let me catch up.

We reached loose rock and pebble that required even more scrambling, the face of Fitz Roy becoming visible.

I was on the precipice. Ahead was the opportunity to witness an incredible view, and it was the clearest of days, no wind, only the occasional puffy white cloud visible in a deep blue sky.  It was a gift.

I had imagined myself in that moment, standing at the top, the view of glaciers and blue lakes and wondrous peaks, my body and heart filled with gratitude that radiated from me like beams of light.

Pole planted on the last rock, back hunched, and dragging my sore body and overstuffed backpack, my mood was more closely aligned with irritation.

At first, I was angry at myself for being irritated.

Then I began berating myself, horrified by my attitude.

Then, I felt profoundly ashamed.

It didn’t take long to become angry that I was ashamed.

My back ached. And all I wanted was sit down.

Then, I snapped at my husband for choosing the worst rock to sit on and for taking his shoes off.

And then I yelled at him for having weird feet.

Then I was quiet.

Guilt –  not being more accepting, lacking the ability to focus on the experience, stuck with me the entire 6 miles back and beyond.

The next day we woke to stormy skies, rain, and blustery wind. We decided to put off the second hike.  Instead we sat in the lobby of the hotel drinking coffee in overstuffed chairs, looking out at the weather.

“This is what it is like in Patagonia.” I heard the woman at the reception desk say to hikers. “One day it is crazy, winds and rain, filled with power. The next day –  only sun and blue sky…” she paused.

I looked over at Gavin. I felt gratitude with every cell in my body.

Later, walking through town, the horizontal rain stung my skin. The sky was dark gray.  Branches moved along the town streets chaotically, blown by a disorganized wind.

Then, at dusk, the winds died down. The day darkened into night and stars were visible.

The next morning, the sun rose. 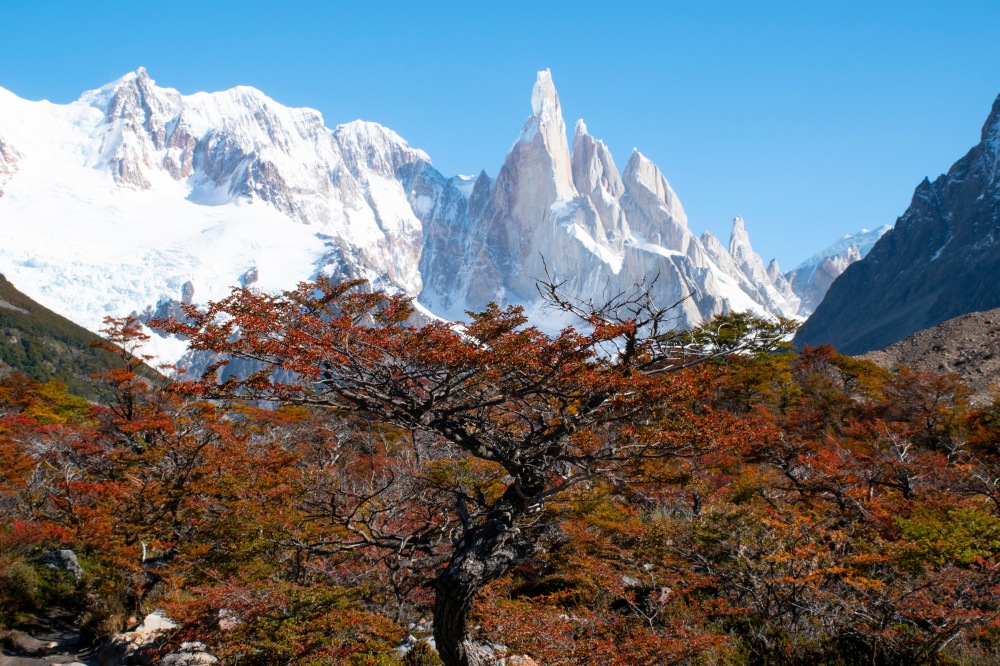 And the skies… they were clear.